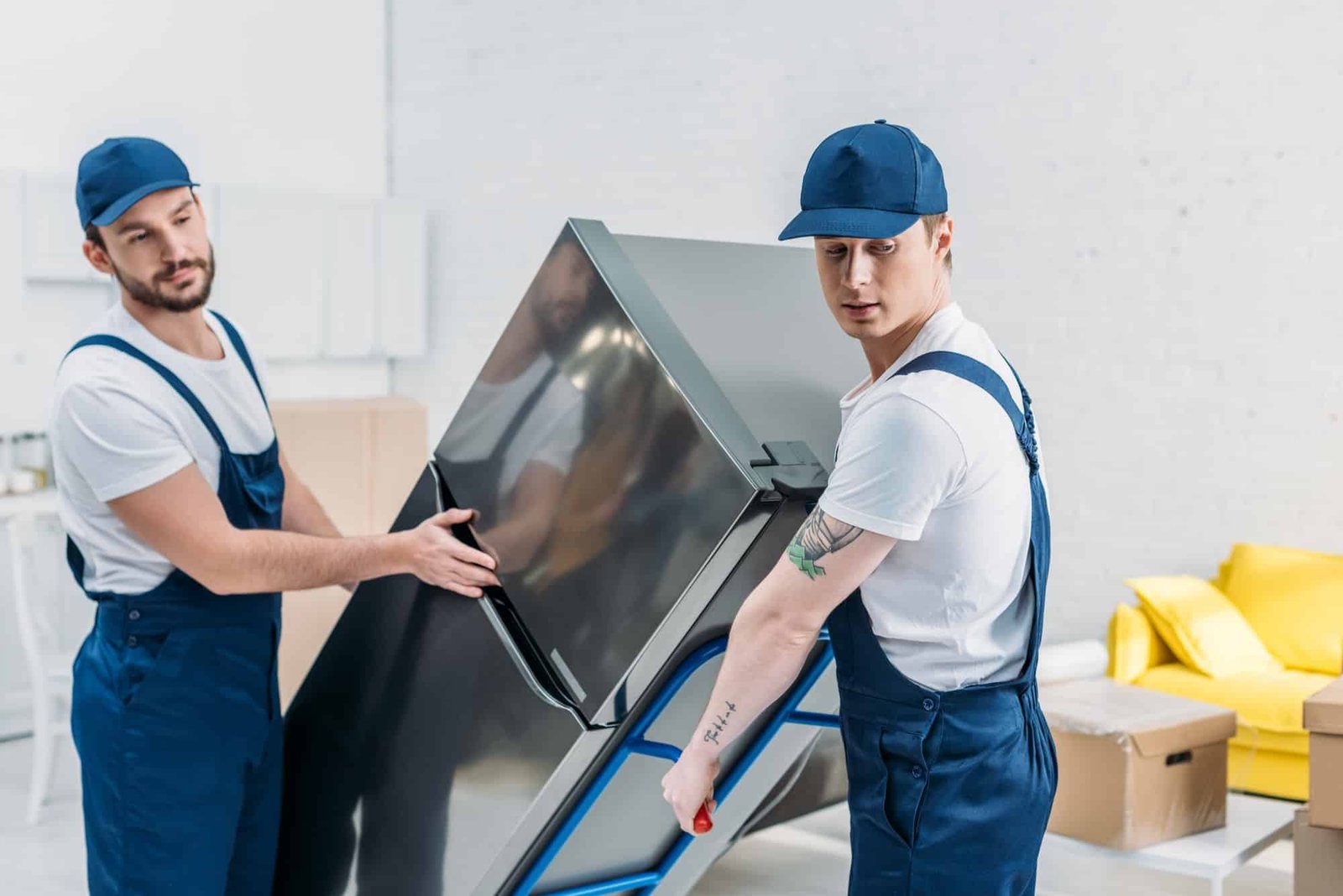 This may seem obvious, but first you need to remove everything from the refrigerator. A week or so before you plan to move, start eating all the chilled foods you don’t necessarily want to take with you. Don’t forget to find storage space for all the things you can’t reach, either by sharing them with someone else or by packing them in a cooler during the move. Then remove the shelves and drawers from the refrigerator.

The newer a refrigerator, the more technologically advanced it is. If the refrigerator has screens on the inside or an ice or water dispenser, disconnect the water pipes and wiring. Pay special attention to the water pipe.

“It’s usually pretty easy to disconnect the water pipes, but as a mover, we’re a little hesitant to mess around with something that involves water,” says Dennis, a mover. “If it’s not sealed properly, you can do a lot of damage. In some cases, you need a plumber to seal it properly.”

Most movers don’t even touch the wiring or water pipes because of liability issues, says Nick Hoogweg, lead mover at moving company VerhuisGoedkoop. Movers do provide the tools, but often won’t do it themselves.

3. Defrost the refrigerator, if necessary

You don’t necessarily have to defrost your fridge before the move.

“If your refrigerator goes to storage, you have to defrost it,” Misinksi said. “If it’s just a short local move, it depends on the weather if it’s necessary.”

Short means no more than six or eight hours for the entire move. In winter, that won’t be a problem. But in the summer, the refrigerator in the truck will begin to thaw and leak water. If you do need to defrost your refrigerator, make sure you have enough time to do so before the move.

How long should a refrigerator be thawed before it is moved?
A refrigerator can thaw in a few hours, depending on its size, but you need to deal with this proactively so that the refrigerator doesn’t unexpectedly leak into the truck and ruin your stuff. Slide the doors open, fill the empty fridge with old towels, unplug it and leave it for 48 hours. If necessary, change the towels to suck everything up.

4. Remove the doors, if necessary

Once the refrigerator is thawed and dry inside, you’ll likely need to remove the doors, either from the refrigerator or from your home. Pulkkinen notes that newer refrigerators are quite large. Some are larger than a standard door size, and they only get bigger. If you cannot easily maneuver the device out of the door, remove your doors from the hinges.

5. Protect the floors, walls and refrigerator

Especially if you have a rental house, you want to be sure that you put rubber mats on the floor wherever the refrigerator will be placed. Those suckers are really heavy, and can immediately scratch floors — regardless of whether you’re using a four-wheeled dolly (which is preferable) or just pushing it along alone (which you shouldn’t do if you value the device). Shrink the refrigerator to avoid scratches, and hang moving blankets in case you bump into drywall.

6. Physically move the refrigerator with a dolly

According to Hoogweg, you don’t want to move the refrigerator without some form of mechanical assistance – and that help should always be in the form of a dolly/furniture dog.

The first thing you need to do is fill the metal of the cart so that there are no scratches on the refrigerator. Slide the base under the refrigerator and wrap straps around the device to secure it to the base. Then brace the base with your foot so that you can tilt the refrigerator towards you. You will have to repeat this process until you have found the right center of gravity. If you get it right, the refrigerator will evenly tilt back and you can push it forward, holding on to the refrigerator itself instead of the dolly so you don’t get hurt. Keep your eyes on one side of the refrigerator, instead of peeking at both sides during the move. It is best if a second person guides you through this.

7. Secure it in the truck

Once you’ve driven the refrigerator to your truck and put it in, secure it tightly to the wall of the truck with a rope or ratchet tires. Refrigerators have wheels with limited mobility, and you don’t want it rolling over the truck and falling on your expensive coffee table.

“There are liquids in the refrigerator’s compressor, and if the refrigerator is tilted or laid flat for extended periods of time, they can migrate to places where they’re not supposed to be,” Pulkkinen said. “It’s not that you can’t do it. But if you do it, you shouldn’t plug it in right away. That way you can burn the compressor through.”

8. Reassemble and connect in the new house

Assuming you’ve first measured the space for the refrigerator in your new abode (and it fits), drive it in. When you lower the refrigerator on the dolly into the new space of your appliance, lower it slowly, using your own weight as a counterweight so that it doesn’t fold down. Reconnect the water pipe and wiring, plug it in and refill the supply with food.